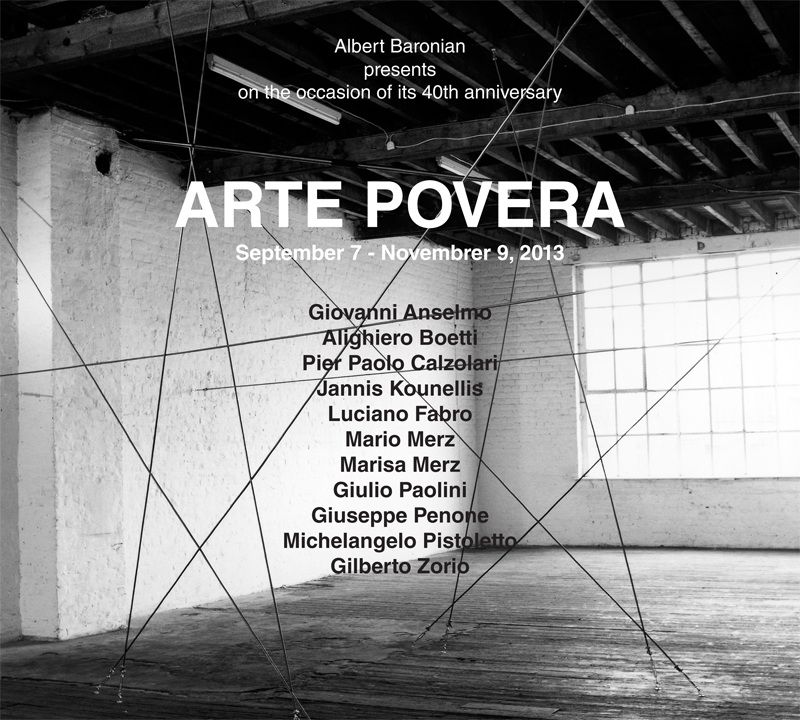 Arranging this exhibition here, to coincide with the fortieth anniversary of the gallery, has a double significance for me.

The first is to pay tribute to the ARTE POVERA movement which has made such a contribution to building a name for the gallery on an international level – if we have a reputation, it is in no small part thanks to this movement.
For example: the first exhibitions of Giulio Paolini, and, in particular, the only solo exhibition of Mario Merz in Belgium were held here.
The second factor, and the more important, is that ARTE POVERA and its protagonists – at least those with whom I have been fortunate enough to work and associate – have made a lasting impression on me as a gallery owner (with the ideals and attitudes that could engender) as well as the battles that we small few were fighting. The likes of Giorgio Persano, Jean Bernier, Marina Eliades, Tucci and Lisa Russo were already on the scene; our ties were strengthened in such moments and have remained very close to this day with the loan of works included in this exhibition.
Even today – in an age when the art market tends to focus on the history of art, and when many artists have become manufacturers of objects – I still consider ARTE POVERA to be the most important movement of the second half of the 20th century in Europe.
In the troubled period during which it emerged, a period of intense change, these artists found “new modes of production”, modified our perspective on the art market, brought us closer to nature through the use of natural materials, and altered our understanding of politics.

The mark these artists have made on history is more apparent today than ever, their influence more tangible than ever. For confirmation we have but to open our eyes and look at current creative trends.