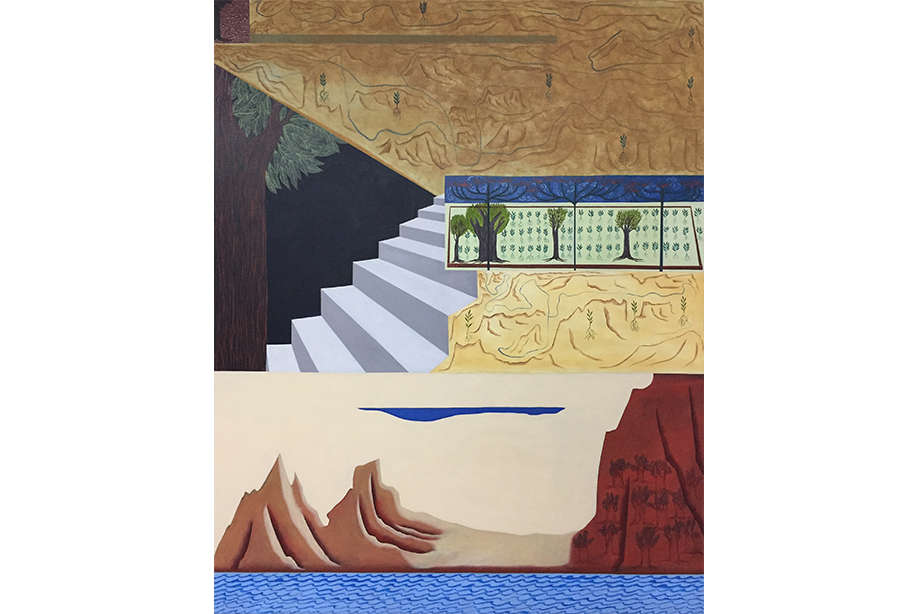 Baronian Xippas is pleased to announce Midway mark, Karishma D’Souza’s solo exhibition at the gallery opening on Saturday May 25th, 2019.

Don’t miss the Guided Tour with the artist at 4.30 pm!

Karishma D’Souza (b.1983, Mumbai, India) is a young painter who belongs to the new generation of Indian artists. In her works, memories of places, stories and people are the containers of a psychological world. The paintings are anchored in her own lived experiences and her literary readings. For her first exhibition in Belgium, entitled Midway mark, she will present a number of oil paintings as well as some smaller, more intimate watercolour paintings.

Karishma D’Souza is inspired by the environment in which she was raised. The views in her paintings transport the visitor to harmonious and peaceful landscapes. Nothing seems to disturb the tranquillity of the scenes – although the harmony is only an illusion. Indeed, through her compositions, Karishma D’Souza uses her poetic and lyrical power to address the political context.

The political situation in India to which Karishma D’Souza’s paintings refer is anything but harmonious: economic and industrial systems have widened the gap between the classes and worsened the social stratification that has been maintained for centuries by the polemical caste system.

The title of the exhibition, Midway mark, refers to the autobiography of Teesta Setalad, one of India’s bravest civil rights activists and journalists, and it honours those who refuse to remain silent against hatred.

The exhibition will open two days after the announcement of the results of the general elections in India. The outcome will determine whether the constitution will change, and whether the word ‘secular’ will be replaced by ‘Hindu’, a revision that seems to favour the majority religion in India but will only help the ruling caste. It effectively means that a large percentage of the Indian population would be relegated to the status of second-class citizens, and their way of life and culture prohibited.

Karishma D’Souza’s interest in the political is rooted in a more global reflection on humanity. Inspired by Sufi poetry and Western literary texts (the writings of Namdeo Dhasal, Kabir, Lal Ded and St. Augustine to name a few), the artist sublimates forms in order to reveal the poetry of the world. Her paintings showcase the nature that surrounds us and links us to our origins, in an aesthetic located halfway between a spiritual, even mystical vision.

In the words of the artist: “The paintings call forth growth, nurturing, and transformations towards peace. They could be categorized into different groupings – Portraits of friends, poets and objects; Poet-Saints and myths; Portals and journeys; Senses; Grids; and Reportage.” Karishma D’Souza views her works as “prayers, beckoning and serving as reminders of the invincible undercurrents which could outlive shrill, menacing, sectarian mindsets” and as “signposts of hope and struggle in these troubling times”.

Karishma D’Souza (b.1983, Mumbai, India) lives and works in Goa (IN). She studied Painting at Goa University and holds a Master of Visual Arts from the University of Baroda.

In 2012-2013 she was an artist in Residence at the Rijksakademie in Amsterdam (NL) and more recently, in 2017, she did an artist residency at the Skowhegan School of Painting and Sculpture in Maine (USA). Awards include the Inlaks Fine Art Award (2011), the Smt. Gopicabai V. Dempo Memorial Prize and the Manguesh Kenkre Memorial Award (both 2004), and the Raoji.V.Gaonkar Memorial Prize (2000).