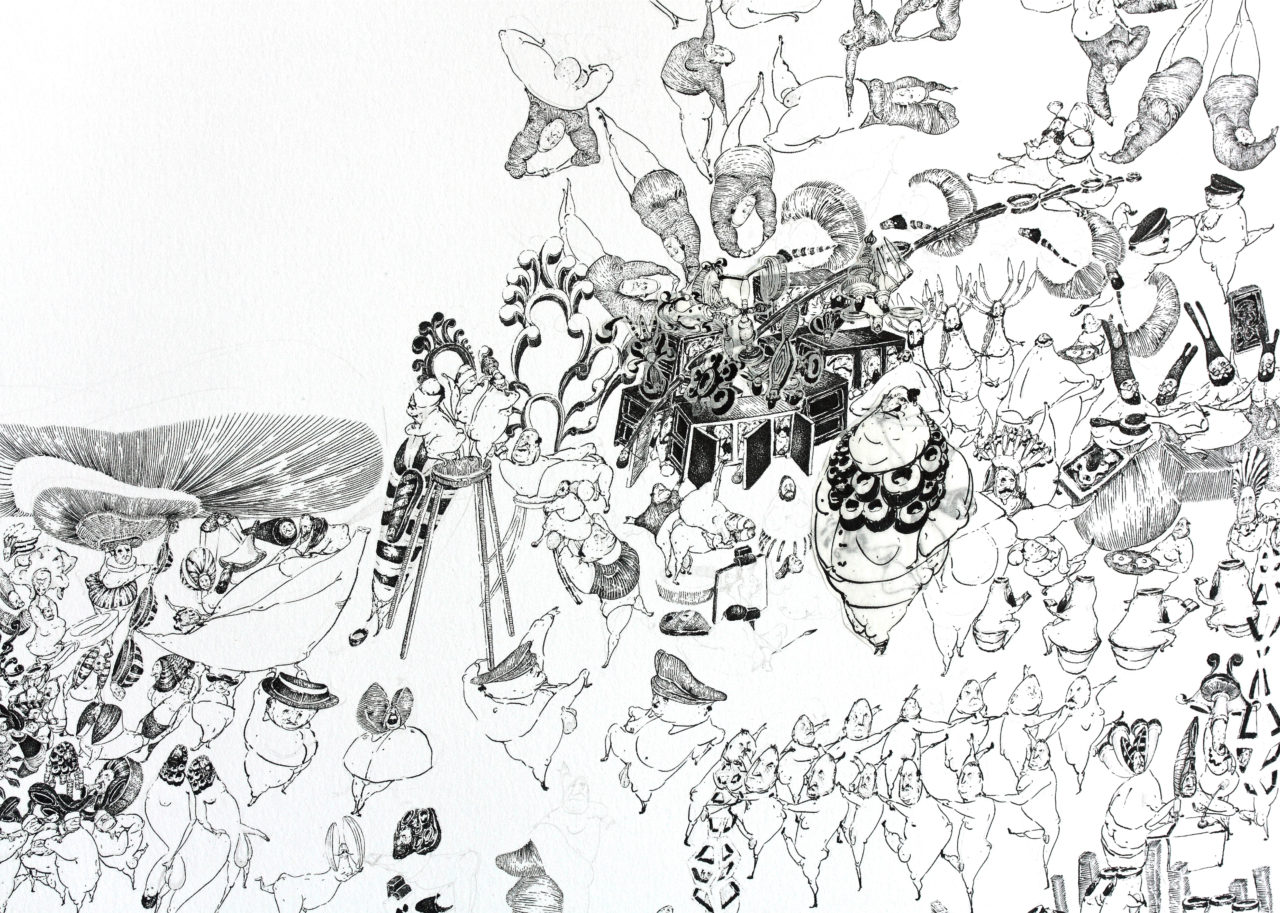 Baronian Xippas is pleased to announce Dibujos en el delirio, a solo exhibition by Uruguayan artist Ricardo Lanzarini (1963 -) opening at the gallery on Saturday May 25th, 2019.

Don’t miss the Guided Tour with the artist and Catherine de Zegher at 4.30 pm!

Ricardo Lanzarini (b.1963, Montevideo, Uruguay) is a key figure of the Uruguayan art scene and works mainly with ink on paper. He is a master of scales and, like a magician, works in all formats, from miniature drawings made using a magnifying glass to  monumental murals. His pen and ink drawings combine historical and autobiographical elements. Nietzsche, Kafka and Karl Marx, among others, appear in his work, as well as religious leaders, reproductions of artworks, prisoners and hospitals… He often combines several references and proposes a variety of metaphors on the functioning of power. The result is a colourful collection of crazy scenes that are filled with humour and pathos.

Ricardo Lanzarini’s iconography refers to images that we encounter every day, but also to those that are etched in his memory. Whether a non-specific autobiographical fact or an historical reference, both can form starting points. Marked by the dark period of military dictatorship in his country, his artistic practice refers to the frustrations of the human condition and features angry men who attack others, those in power struggling to define their territory, etc…

Other images can be interpreted as ironic metaphors of power and politics. In some works, we have the feeling that the artist takes us behind the scenes of reality to reveal the true faces of political actors. They all play a role, a role that only appeals to one person, the spectator.

The “Academia de arte” series of drawings depicts a group of characters who ‘simulate’ the creation of an artwork. The absurdity represented by this series is not just radical because of its inaccuracy, the lack of historical context and the absence of common sense, but also due to the arrogance, fearlessness, spontaneity and exhibitionism. This ironic and critical scene aims to destabilize the viewer. (*)

Ricardo Lanzarini was born in Montevideo, Uruguay (1963), where he lives and works. He  graduated in Fine Arts at the University of the Republic, Uruguay.

In 2005 he was included in Emma Dexter’s Vitamin D: New Perspective (Phaidon Press). In 2015 his work was part of Roger Malbert’s Drawing People: The Human Figure in Contemporary Art (Thames & Hudson).